Unlike other lower bands described later, the 47,088 MHz band (wavelength of 0.64 cm) doesn’t have a long history of use here. The wavelength is truly a bit too short for amateur radio experimentation. In fact, this range of frequencies has not been vastly allocated among professional users either. It has not been necessary so far since there are other frequency ranges available with a plentitude of space.
The first description was published in the magazine Dubus by Michael DB6NT in the early 90s. The basis for operation in the transmit and receive mode is a common sub-harmonic mixer, i.e. a concept, which is the same for 24 GHz and other lower bands as well. The design is probably the best achievable compromise between the level of difficulty of building the unit, its functionality, and the cost. The power output is almost imperceptible, i.e. measurable in units or tens of microwatts, yet the basic kit doesn’t contain an antenna relay. The device, which resembles an ordinary input satellite unit, accommodates an LO amplifier and a frequency-multiplier unit, as well as a single-stage IF amplifier and a source of supply voltage. The oscillator signal (LO) is constructed from a set-up already known from lower bands, i.e. a universal assembly incorporated on a DF6VB circuit board followed by a frequency-multiplier unit DC0DA for 11,736 MHz. The design is apparent from a schematic diagram shown in the following picture:

The IF frequency for microwave amateur radio devices (not just the microwave ones as a matter of fact) should generally be set at approximately one-tenth of the receive frequency. This approach leads to the solution of a number of problems at the same time, especially those related to the filter characteristics. The filter in question does not necessarily have to have such excellent properties (narrow pass-band, low attenuation) as that used in conjunction with low IF frequencies. In our case, we have realized that there is a certain level of dissipation or losses including some additional noise that comes from a mirror frequency. We have not used a filter so far, and for simplicity, the IF frequency has been set at 144 MHz. The first SSB two-way contact took place on May 2nd, 1995 with OK1UFL. The distance between the two stations was circa half a kilometer, which was extended up to about 4 kilometers on the very same day. This contact has been repeatedly made in every subsequent contest ever since. 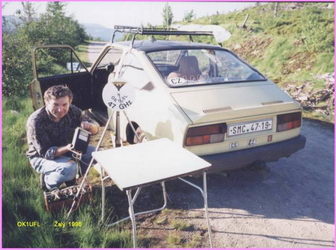 In June 1995, Procom, the Danish company, organized the Danish Microwave Activity Week. The whole event that takes place every year, lasted for two weeks and was rather challenging. A detailed description can be found in the AMA Magazine 10/95. Thanks to DB6NT and DF9LN, and thanks to an invitation from OZ1UM, I was able to attend this gathering and bring along equipment for 10, 24, and 47 GHz. I had a good opportunity to test the equipment and compare it with that of others. It was a wonderful experience for me since I had a chance to meet with well-known people, take a closer look at their equipment, exchange knowledge and information concerning latest developments as well as general issues, and try out rain-scatter operation for the first time in my life, which involved a historically first contact between Denmark and Norway on 24 GHz. Also, for the first time in my life, I saw a stable TXCO made by DF9LN. Since we had been experiencing great difficulties at home with 24 and 47 GHz, this was an excellent opportunity to figure out a solution we had been looking for. I brought color documentation and electronic parts for one piece of an oscillator. At that time, the Procom company had already been manufacturing components for up to 241 GHz including parabolic antennas of different diameters. Needless to say that I took the chance to get a few of these antennas from OZ1UM. This was a step forward on the overall journey of continual improvement of our home-brew equipment we had at that point in time. 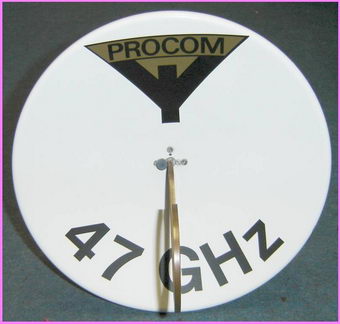 The venture was so appealing that it inspired us to organize a similar gathering (yet only a one-day event), which we named a Microwave Control Day. The picture below presents on of these Control days near the town of Vysoke nad Jizerou. 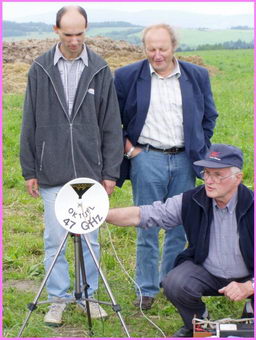 The Danish Microwave Activity Week in 1994 and 95 was a milestone in the development of microwave technology and accelerated its progress. The following pictures were taken in Skagen:

There were 36 stairs leading up to the dune, which served as the highest portable QTH over Skagen… 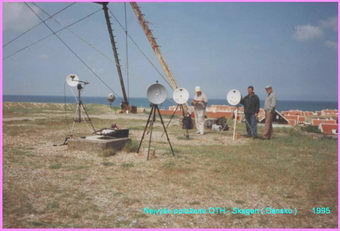 Bjarne V. Sorensen OZ1UM, the chief executive officer of Procom, is handing over the prize to DC0DA: 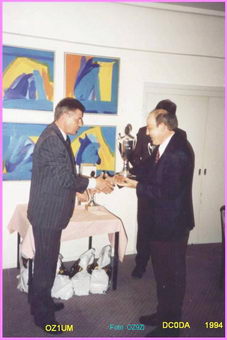 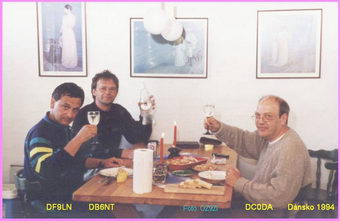 The last operation of building the transvertor for 47 GHz was the sticking of mixer diodes. This was done at DB6NT for practical reasons. The diodes used are so small and so expensive that any handling and manipulation requires appropriate tools and equipment. The dimensional figures are shown in the following picture:

Michael DB6NT had already had the necessary equipment and tools and thus was able to build top-quality components. Here, you can take a look into his workshop: 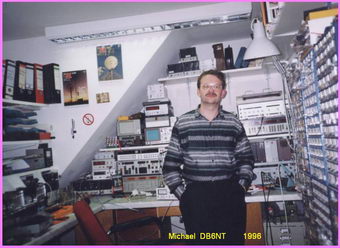 The first contacts that took place were also made with DB6NT… 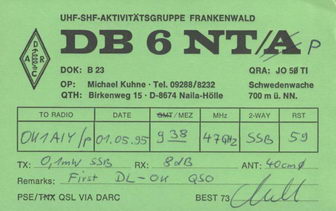 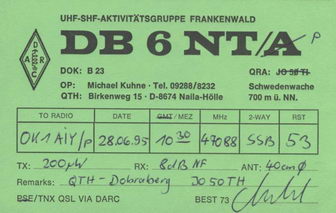 In 1996, a new TCXO was put in our 47 GHz equipment and thus we were able to make a contact in almost every contest. 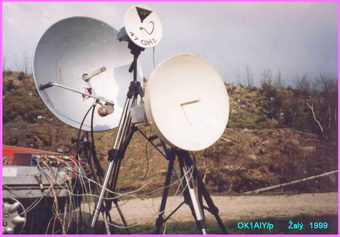 Eight years later, DB6NT built the first few amplifiers for 47 GHz. The amplifier was tested with the equipment in 2004. The improvement expectations were met and we were able to audibly hear the sun noise even with a parabola of 250 mm in diameter. 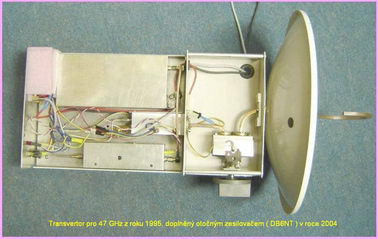 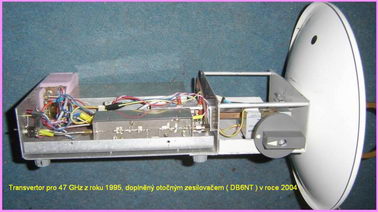 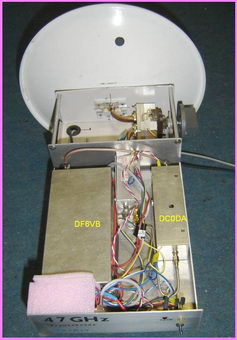